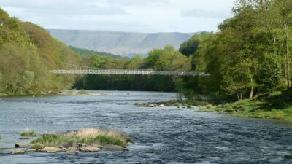 The River Wye (Welsh: Afon Gwy) is the fifth-longest river in the UK and for parts of its length forms part of the border between England and Wales. The 6 main tributaries of the River Wye include the River Lugg, Afon Edw, Afon Elan, River Trothy, River Monnow, and Dulas Brook

The source of the Wye is in the Welsh mountains at Plynlimon. It flows through or past several towns and villages including Rhayader, Builth Wells, Hay-on-Wye, Hereford, Ross-on-Wye, Symonds Yat, Monmouth, and Tintern, meeting the Severn estuary just below Chepstow.

The River Wye is protected by two Sites of Special Scientific Interest, one covering the Upper Wye (Gwy Uchaf) above Hay-on-Wye, and one covering the Lower Wye (Gwy Isaf) downstream to Chepstow. The criteria for inclusion of the river as an SSSI include geology, topography, flora, mammals, invertebrates, fish, and birdlife, as the river and its tributaries constitute a large linear ecosystem. The Lower Wye SSSI is itself divided into seven units of assessment set by Natural England, and administrative responsibilities are shared between the councils of Powys, Herefordshire, Gloucestershire, and Monmouthshire. The Wye abuts a range of other SSSIs in England and Wales, including the Upper Wye Gorge and Lower Wye Gorge.

It is also a Special Area of Conservation and one of the most important rivers in the UK for nature conservation. It is an important migration route and wildlife corridor, as well as a key breeding area for many nationally and internationally important species. The river supports a range of species and habitats covered by European Directives and those listed under Schedule 5 of the Wildlife and Countryside Act 1981. In Powys, the river lies within the Radnorshire Environmentally Sensitive Area. Much of the lower valley is an Area of Outstanding Natural Beauty.

Possibly the earliest reference to the name is Guoy in Nennius’ early 9th Century Historia Brittonum and the modern Welsh name is Gwy. The Wye was much later given a Latin name, Vaga, an adjective meaning ‘wandering’.The Tithe map references a Vagas Field in both Whitchurch and Chepstow. Philologists such as Edward Lye and Joseph Bosworth in the 18th and early 19th centuries suggested an Old English derivation from wæg, “wave”.

Between Rhayader and Builth Wells, the river Wye falls approximately 250ft, and so there are lots of interesting stretches of water to fish, some are ideal for holding brown trout and grayling. The Salmon can also be found in this stretch, having taken the opportunity to run up the river whenever there has been high water. There are some coarse fish on the upper Wye, mainly Dace and Chub. The middle reaches from Builth Wells down produce great bags of Barbel, Chub, Dace, Perch, and Pike. The lower reaches around Monmouth can see the rare shad during April & May. 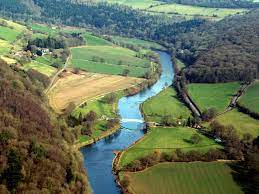 The Lower Wye has been designated as a salmonoid fishery under the EC Freshwater Fish Directive. The Wye used to be considered one of the best rivers for salmon fishing in the United Kingdom, outside Scotland. In the 1980s and 1990s, salmon in the Wye declined dramatically. In 1967 the Wye rod catch was 7,864, and as recently as 1988 it was 6,401; but by 2002 it was only 357. Attempts are being made to help the river recover from this low, such as the extensive habitat improvement work carried out by the Wye and Usk Foundation, set up to restore the spring salmon runs, however, results have been largely disappointing. In 2015 the five-year average once again climbed above 1,000, and it is now the third-best salmon river in England and Wales, surpassed only by the Tyne and Wear.

The Wye was particularly famous for its large “spring” salmon that had spent three or more years at sea before returning to spawn. They used to enter the river between January and June and sometimes reached weights of over 50 pounds (23 kg), the largest recorded being 59 lb 8 oz (27.0 kg) landed after a long fight by Miss Doreen Davey from the Cowpond Pool at Winforton on 13 March 1923. The last recorded 50 lb (23 kg) rod-caught salmon from the Wye was taken in 1963 by Donald Parrish and weighed 51 lb 8 oz (23.4 kg). Since the early 2000s the spring catch has been steadily recovering and salmon of over 35 lb (16 kg) have been reported every year since 2011.

With more than 30 species of fish recorded in the Wye, it is one of the most important river systems in Northern Europe, having internationally significant populations of salmon, Twaite Shad and bullhead, as well as three species of lamprey. Migrating fish like the Twaite Shad come into the  to spawn, whilst salmon move through the on the way to their spawning areas upstream.  Except for salmon, most fish still maintain healthy populations in the high quality environment of the river Wye and its tributaries.

The river contains many coarse fish species including stone loach, dace, roach, eel, grayling, gudgeon, minnow, carp, three-spined stickleback and rudd.  It is one of the UK’s top rivers for barbel and also has good stocks of large chub, and pike. Flounder inhabit the lower reaches, particularly the tidal parts of the river, and have occasionally been recorded further upstream. A very rare visitor to the Wye is the sturgeon, which hasn’t been recorded since the 19th century. A massive sturgeon 2.2.m long and weighing 182lb was caught at Hereford in 1846, the remains of which are on display in Hereford Museum.

The Twaite Shad is a species of herring living most of their life in coastal waters but migrating into rivers in May, giving them the name ‘May fish’. The Wye is one of only four rivers in Britain the Shad migrate to spawn in, and it contains the largest spawning population in the UK. In the past they were caught in large quantities along the Wye, using a special net called a cleach net. It looked like an immense landing net on the end of an 18 foot larch pole. The river needed to be running high so the fishermen could stand on the bank and scoop up the fish as they swam upstream. Many fishermen thought that Shad were inedible due to the number of small bones they have. They were mainly caught for their roe. The rest was given to the pigs!

Three species of lamprey are found in the Wye – river, brook and sea. These prehistoric looking creatures are some of the most primitive vertebrates alive today. They are known as cyclostomes, which means ’round mouths’ referring to the fact that they are jawless, having a round sucker-like mouth. A further primitive characteristic is that the skeleton consists of cartilage and not bone. Lampreys are similar in shape to eels, and have a series of uncovered round gill openings (known as gill pores) on the sides of the head. The river lamprey can be distinguished from other lampreys as it has two separate dorsal (back) fins, and just a few teeth around the mouth. It is bluish grey or green on the back and sides and the underside is white. Sea Lampreys, up to four feet long, migrate to the Wye in May and June to spawn, moving rocks on the river floor with their sucker-like mouth to make a nest.  This amazing video by John Waters for the Wye and Usk Foundation,

Eels and Elvers: The end of an extraordinary 2,500 mile journey ends every April in Llandogo. Elvers (baby eels) start life in the Sargasso Sea (near Bermuda), where the eggs hatch into transparent eel larvae which drift across the Atlantic on ocean currents, a journey which takes three years.  By this time they have grown into little glass eels and find their way into the river Wye, swimming upstream with the incoming spring tides. Eels like slow moving, silty environments where they can bury themselves in the mud at the bottom of the river. They like to stay there during the day and come out to feed at night, so if you want to see one, that’s the best time to be looking. They remain in the river for about seven years, before a return journey is made back to the Gulf, to spawn and die.

Now available as a paperback 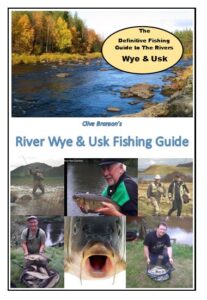 The contents on the website are copyright, If you need to copy please send an email for permission